With the massive amounts of new necron models, fighting necron enemies is somewhat of a growing trend. I experienced my first defeat last Friday… Yesterday I played the same opponent with the exact same list he defeated.

My initial thoughts on this army – Lots of AV13 and they can dish out some serious fire power. As of now, the bane of my blood angels are the necron stalkers which grants everything shooting at the same target the twin linked special rule as long as the stalker itself scores a hit (no need to wound). In this case, a full assault squad can be whittled down even with a sanguinary priest embedded into the unit far too easily. Imagine doomsday cannons’ & monoliths’ throwing out large pies with rerolls if they scatter off!

In any case, trying to outshoot the necrons is difficult to say the least. Therefore I’ve opted to use a “decent of angels” army to combat this. Get in their face as quick as possible so that you sustain less shooting and CQC these robots to death… I’ve also found it very useful to fill up all troops slot since necrons will eat vehicles very easily with the scarabs and with so much shooting coming at you, having your maximum troops slots makes it a bit more forgiving.

The biggest hint I can offer is “target priority”… That said the first unit to kill are the stalkers. With them out of the equation, it becomes much easier to dissect this army. Secondly, take a good mix of power weapons and powerfists or thunder hammers. A lot of necron units have AV13… anything short of a melta gun or a powerfist simply cannot hurt it. Versus necron infantry, take power weapons or lightning claws to kill as many as possible. I’ve had space wolf grey hunters struggling to deal with the regenerating necrons. The necrons are tough!!!

Thirdly, necrons are highly mobile… Their units can teleport or walk out of portals. Chances are they can somehow slip through a charging line of assault units. When that happens, necrons can quickly grab objectives or just kite you around. To counter this, I take 2 vindicators with overlapping arcs of fire to cover each other towards the back of the board ready to blow up whatever that slips through. Weapons with large pie plates are great because when teleporting or exiting a portal, necrons need to be packed close together. “say hello to my little friend”

Below are pictures from T2, T4 & T6 of my game against necrons yesterday. Take note of the position of deployment my opponent chose, cross firing doomsday cannons (there's actually one on the left, angle wasn't wide enough to capture) with a stalker in the middle… sneaky sneaky…. Also note the vindicators camping open grounds to anticipate any teleporting units. Also note, when the monolith was alive, the gem at the top is green... when dead, it turns into a brown turd... lol

All in all, yesterday was a good game. We were playing objectives and by the bottom of T6, the necrons realized they had no more options for capturing objectives and folded. I think it would have been highly possible to table him if we played a T7… None the less, I had a great time. It amazes me how effective knowing the enemy’s strengths and weaknesses can help even if I used the same list. 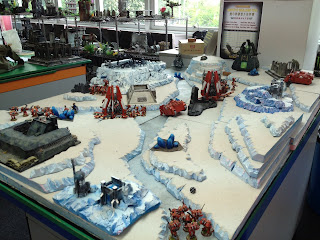 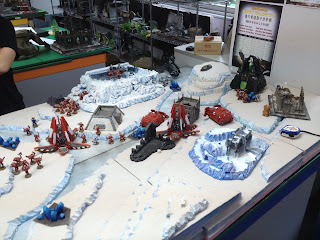 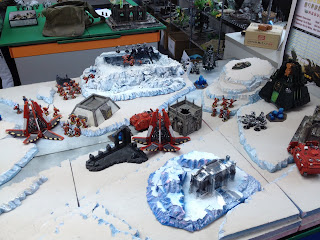