Imperial Fists Painting Yellow - An Experiment and an Evolution

We all know how tough it is to paint yellow, so I set out to yet again smash the preconceived notions of the painting world (an in-joke there not just plain arrogance haha) and find an easy and successful way of painting Imperial Fists. They all said (they being Ben) you couldn't dry-brush marines but I showed them! So here goes...


First of I start by basecoating them white in order to bring out the yellow more. Then I dry-brush Averland Sunset. 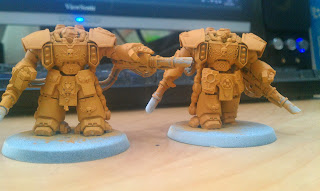 I had then tried drybrushing a 'Model Color' Flat Yellow over the top before washing with Casandora Yellow. But I didn't like it as the darker recesses were more orangey and not dark enough. So I abandoned this route. Even though the positives were the yellow ended up very even and clean looking and the whole process took very little time and was easy to do. 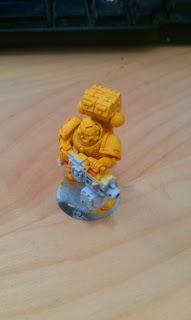 To rescue the models I quickly washed them with Agrax Earthshade which got the recesses dark brown enough which was what I was going for. However the model started to look messy so I had to begin layering up via dry-brushing the Flat Yellow colour again. Because these are test models they are probably always going to look a bit dodgy from now on but I'm just trying to get them back to a decent level. 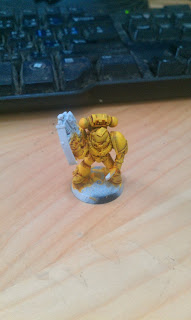 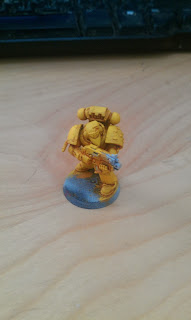 The next stage of the evolution was realizing that the yellow was too "lemoney" so I dry-brushed a quick layer of Yriel Yellow over the top on the leading shoulder guard. This achieved the Imperial Fist colour I was looking for and because it was yet another dry-brushed layer it has made the yellow quite smooth and solid and not streaky. It still doesn't look great because its still an build up of test methods but it's now passable. 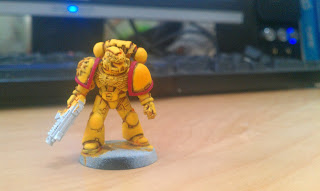 This is one that has completely been covered with Yriel Yellow (the red trim needs redoing obviously). 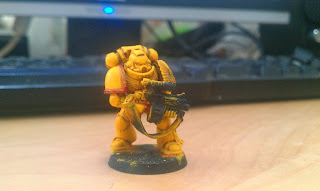 Knowing what I know now I have done these three - beginning with the first layer of Averland Sunset and then washed with Agrax Earthshade. 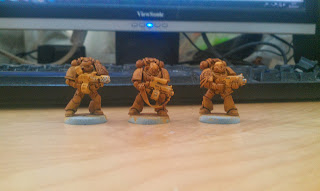 The next step is to dry-brush the Yriel Yellow layer by layer over the top until the colour is bright enough and not too streaky. The streaky effect will be later nullified by weather/battle damaging the armour. 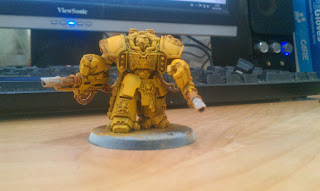 Further steps to follow shortly...
Posted by Ethrion at 2:43 PM